Regolith starting a new release series with split tapes. First is with the free jazz duo FS MASSAKER from vienna and named simply “spl1t”. The idea of this split series is releasing new stuff with friends. On “spl1t”, REGOLITH digging in their live archives and putting some rare tracks on it, which are released on several compilations (or not). Available on the upcomig REGOLITH shows, like on august 23rd 2014, on the Klangfestival / Gallneukirchen / Austria. Upcoming splits with SΔGΔΔN and Elektro Guzzi. 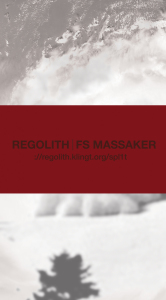